Abee is an EH4 (enstatite) chondrite that fell in northern Alberta.

According to Griffin et al. (1992), around 11pm on the night of June 9th, 1952, the sky north of Edmonton was lit up by a brilliant fireball. One observer at a local drive-in movie theater even claimed that it was so bright that the movie wasn’t visible. Witnesses reported watching the fireball for several seconds, and that it was followed by a loud rumbling sound. 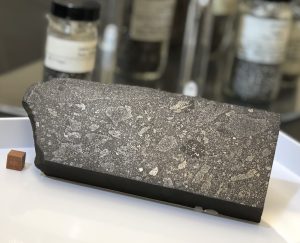 The fireball, and the meteorite fall that had potentially succeeded it, were the talk of the area for days afterward. Almost a week later, on June 14th, a local farmer noticed a 1.5 metre deep hole in his freshly seeded field, at the bottom of which was found a single 107 kg stony meteorite.

Abee was the seventh of only seventeen meteorite falls recorded in all of Canada, and the first of five reported falls, to date, in Alberta. Photo: ASU/CMS.

Griffin, A.A. et al. 1992. The fall of the Abee meteorite and its probable orbit. Royal Astronomical Society of Canada, Journal. 86, pp. 5-14. ISSN 0035-872X  (contains a very detailed account of the meteorite fall, including a photo of the finder).