After Bleacher followed Leshin’s footsteps from the CMS to NASA’s Goddard Space Flight Center in 2007, Laurence Garvie joined the CMS as Collection Manager. Garvie’s meteorite research focuses on the composition and structure of carbonaceous materials within primitive meteorites. He has documented the composition, morphology and porosity of globules in a range of carbonaceous chondrites, but the cause behind the different populations he observes in different meteorites remains unknown.

In 2009, Garvie became the first CMS member to find a meteorite outside of the National Science Foundation Antarctic meteorite hunting expeditions attended by both Directors Leshin and Wadhwa.He happened upon Chandler, a ~350 g L6 ordinary chondrite while he and one of his daughters were photographing the desert on a warm winter day.
Garvie is also well-known to the meteorite hunting community and the general public through his appearances on the Discovery Science show “Meteorite Men”.
RETURN TO TOP
CMS 50th Anniversary Symposium
On October 21, 2011, the CMS marked its 50th anniversary with a symposium entitled Meteoritics and Cosmochemistry:  Past, Present and Future.
The symposium featured world-renowned invited speakers, including Gerald Wasserburg (California Institute of Technology), Donald Burnett (California Institute of Technology), Andrew Davis (University of Chicago), Caroline Smith (The Natural History Museum, London), Philip Christensen (Arizona State University), and Timothy McCoy (Smithsonian Institute).  The Symposium Introduction was presented by Kip Hodges (Director, ASU School of Earth & Space Exploration), Meenakshi Wadhwa (Director, ASU Center for Meteorite Studies) and Carleton Moore (Founding Director, ASU Center for Meteorite Studies), and can be watched here.
During the CMS 50th Anniversary Symposium, it was announced that the Center's meteorite collection would be named the Carleton B. Moore Meteorite Collection, in honor of the Center's Founding Director.
In 2012, both Michelle Minitti and Philip Janney departed ASU, and Melissa Morris joined the CMS as new Assistant Director.  Morris's research focuses on star and planet formation, in particular the use of astrophysical modeling to determine conditions during the birth of planetary systems.  Her specific interests include hydrodynamic modeling (including radiative transfer) of protoplanetary disks and disk processes during planet formation, mainly through the application of mineralogical data of planetary materials.  The oldest known material in our own planetary system can be found in meteorites and, by combining meteoritic data and the results of astrophysical modeling, Dr. Morris endeavors to further our understanding of the conditions that existed in the early solar nebula and exist in extrasolar disks today.
RETURN TO TOP
CMS moves to ISTB4 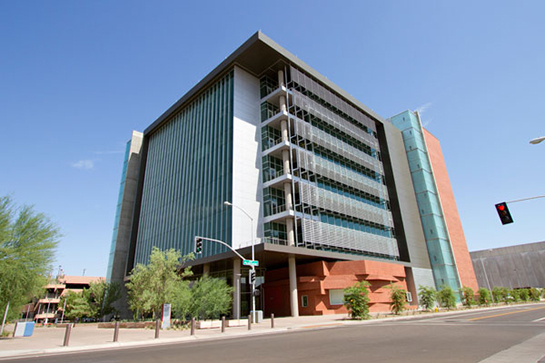 Photo: Interdisciplinary Science Building IV on the ASU Tempe Campus. Image ⓒ ASU.
In May, 2012, the Center moved from the location it had occupied since its founding in 1961 (Physical Sciences C-Wing) to a new, modern research facility across ASU's Tempe Campus:  Interdisciplinary Science and Technology Building 4 (ISTB4).
ISTB4 was purposely constructed to house the School of Earth & Space Exploration, including the Center for Meteorite Studies, and Fulton School of Engineering.
The climate-controlled collection storage vault was designed to be the most state-of-the-art facility of its kind, and includes specialized steel specimen cabinets, nitrogen dry-environment cabinets to minimize contamination of sensitive specimens, and heavy-duty full-extension shelving cabinets for oversize meteorites.  A grand total of 4,000 square feet of collection storage provides the CMS with the necessary space to properly house every piece in the current collection, as well as room to grow.
The Center's Meteorite Gallery, on the second floor of ISTB4, is part of the Gallery of Exploration, which receives over 10,000 visitors each year.
CMS Director Meenakshi Wadhwa spent the winter of 2012–13 in Antarctica, collecting meteorites as a member of the Antarctic Search for Meteorites (ANSMET). This season marked the first time the ANSMET team included 2 researchers from the same institution at the same time, as ASU School of Earth & Space Exploration Professor Thomas Sharp also participated.

The summer of 2013 saw the addition of Teresa Ashcraft as CMS Outreach Coordinator. An observational astronomer, Ashcraft updated the Center’s loanable meteorite modules to meet changing state educational standards as part of the NASA Space Grant program at ASU. She provided support for the Center’s outreach activities through the end of 2014.

In late 2014, Melissa Morris began an appointment as Assistant Professor in the Department of Physics at the State University of New York in Cortland.

In early 2015, Devin Schrader joined the Center as Assistant Director. Schrader’s research interests concern primitive astromaterials that remain unaltered since their formation in the early Solar System, and meteorites that were thermally and aqueously altered on their parent asteroids. While Schrader primarily studies carbonaceous chondrites, ordinary chondrites and Hayabusa particles from asteroid Itokawa, he has worked on a range of extraterrestrial materials. His research aims to characterize primitive early Solar System material, determine its variability between meteorite groups, and understand its evolution.

In 2015, the Center unveiled a new plaque commemorating Herbert G. Fales in honor of his steadfast support of and contributions to the CMS, without whom ASU’s world class meteorite collection may never have come to be.

Later that year, Susan Nowak retired, and Rebecca Davis joined the CMS as Program Coordinator. Davis supports the Center with financial, sponsored projects, and human resources management, and is also an active participant in the Center’s education and public outreach activities.

Hines and Schrader continued to expand the Center’s outreach activities, updating the loanable meteorite modules, migrating the CMS website to a new hosting platform and increasing the group’s online offerings to include social media [Follow us on Twitter and Facebook!]. In addition to ASU events such as Earth and Space Open House, Homecoming, Open Door, and School of Earth and Space Exploration Day, CMS researchers began participating in annual online events such as Ask a Curator Day and SunDevil Giving Day, and the Center’s Meteorite Gallery joined the federal Blue Star Museum program. Jurewicz established a new hands-on meteorite outreach program in collaboration with Vermont’s Montshire Museum of Science, modelled on CMS educational programming.

Arizona Fireball
During the early morning hours of June 2, 2016, a bright fireball was widely observed throughout the southwestern US, generating radar reflections consistent with falling meteorite material. Analysis of Doppler radar data showed that stones had likely landed on the southwestern corner of the White Mountain Apache tribal (WMAT) lands.

With the help of Jacob Moore (Assistant Vice-president of Tribal Relations at ASU), permission was granted by Ronnie Lupe, the WMAT Tribal Chairman, to enter the tribal lands and search for and collect meteorites. Center Meteorite Curator Laurence Garvie began searching the rugged, mountainous terrain of the WMAT for meteorites, along with CMS PhD Candidates Daniel Dunlap, and Prajkta Mane. After over 130 hours of meteorite hunting in remote Arizona backcountry, their efforts were rewarded and they ultimately recovered 15 stones.

Upon his return to ASU, Garvie immediately began the work of classifying this new meteorite. Given the name Dishchii’bikoh Ts’iłsǫǫsé Tsee by the White Mountain Apache Tribe, it was determined to be an LL7 chondrite, the fourth witnessed meteorite to fall in Arizona.

Dishchii’bikoh Ts’iłsǫǫsé Tsee remains the property of the WMAT, and will be curated in perpetuity by the ASU Center for Meteorite Studies.

2016 also marked the inauguration of the Nininger Student Travel Award, supporting travel to the annual Lunar and Planetary Science Conference (LPSC) of up to 4 School of Earth and Space Exploration undergraduate and graduate students to present their latest results. The award is granted by the Center for Meteorite Studies and the School of Earth and Space Exploration.

In 2017, Asteroid (117581) Devinschrader was named in recognition of Center Assistant Director Devin Schrader.

The Center for Meteorite Studies hosted NASA Administrator Jim Bridenstine in February of 2018, during his tour of NASA funded science facilities and institutions, shortly before his confirmation.

Davidson is an isotope geochemist and petrologist who specializes in the study of primitive astromaterials and planetary volatiles. Her expertise lies in the petrology and isotope chemistry of carbonaceous chondrites (including CM, CO, CR, CV, CK, and ungrouped carbonaceous chondrites), interplanetary dust particles, and meteorites from large planetary bodies such as the Moon and Mars. She also studies ordinary chondrites and Hayabusa-returned particles from asteroid Itokawa and has an interest in the organic and presolar grain components of early Solar System materials.

Davidson characterizes primitive early Solar System samples to aid understanding of the material from which small bodies formed, and trace changes in this material as a result of pre- and post-accretionary processes with the goal of understanding asteroidal evolution in the early Solar System. She was recently part of a team that discovered carbon-rich fragments – believed to have originated in a comet – inside a primitive asteroidal meteorite. For her contributions to planetary science and the OSIRIS-REx mission, Davidson had asteroid 117595 Jemmadavidson (2005 EG62) named after her in 2017 .

Since she joined CMS, Davidson has also developed an interest in planetary volatiles and recently determined the hydrogen isotope composition of the martian crust to help increase our understanding of water on Mars.

In July, 2019, Meenakshi Wadhwa was appointed Director of the ASU School of Earth and Space Exploration, and Devin Schrader assumed the role of Interim Director of the Center for Meteorite Studies.

The ASU Center for Meteorite Studies continues to expand the variety and number of meteorites in the CMS collection through classification, donation, and trade efforts led by Garvie. In 2020 the collection consists of over 2,000 distinct meteorites.  Garvie also classified several significant new meteorites, including Aguas Zarcas (CM2, Costa Rica) and Kolang  (CM1/2, Indonesia).

Center research activities were especially productive during this period, resulting in over 20 peer reviewed scientific papers, and 29 international conference abstracts .

During the 2020 Covid-19 pandemic, Schrader and Davidson filmed a virtual tour of the Center’s collection, enabling students, educators and the public to visit the CMS meteorite vault remotely, and CMS increased online offerings for at-home and virtual educators.

The future
The ASU Center for Meteorite Studies continues to produce cutting edge research in the field of meteoritics, and curates over 40,000 individual specimens representing more than 2,100 distinct meteorite falls and finds. The Center remains dedicated to sharing knowledge and resources with researchers, students, educators, and the general public by providing opportunities that expand awareness and understanding of the science of meteorites.
RETURN TO TOP