The Nininger Meteorite Award recognizes outstanding student achievement in the meteoritical sciences as embodied by an original research paper.  Papers must cover original research conducted by the student and must have been written, submitted, or published between January 1, 2021 and December 31, 2022.

Applicants must be the first, but not sole, author of the paper and must have been enrolled in an undergraduate or graduate degree program at an educational institution in the United States at the time the paper was written, submitted, or published.

The Nininger Award recipient receives $2,000 and an engraved plaque commemorating the honor.

Recipients will present their paper in an online seminar hosted by the Buseck Center for Meteorite Studies.

Applications will be considered by an independant review panel of field experts.

Read about the most recent award recipients, here!

History of the Award

In 1965, Dr. H.H. Nininger and Mrs. Addie D. Nininger endowed the Nininger Science of Meteoritics Fund to the Center for Meteorite Studies at Arizona State University in order to promote interest in meteorite-related topics among young scientists. The Fund supports the Nininger Meteorite Award, which recognizes outstanding student achievement in the “Science of Meteoritics” as embodied by an original research paper. Past recipients include Harry Y. McSween (University of Tennessee), Edward Stolper (California Institute of Technology) and the recipients of the 2010 Barringer Award (William K. Hartmann, Planetary Science Institute), 2002 Nier Prize (Dante Lauretta, University of Arizona), and 2005 Leonard Medal (Joseph Goldstein, University of Massachusetts, Amherst).
Download a list of the past recipients.

The original text of the Nininger endowment states that the "Science of Meteoritics embraces all aspects of the study of inert natural matter existing in space, passing through the atmosphere, or having come to Earth from space, together with any or all of the phenomena occasioned by its fall and its effect upon the Earth or upon any other member of the Solar System. Such science shall also be considered to include theoretical consideration as to the origin of such matter and special relationships". Research topics covered under this description include, but are not limited to, physical and chemical properties of meteorites, origin of meteoritic material and cratering. Observational, experimental, statistical or theoretical investigations are allowed. 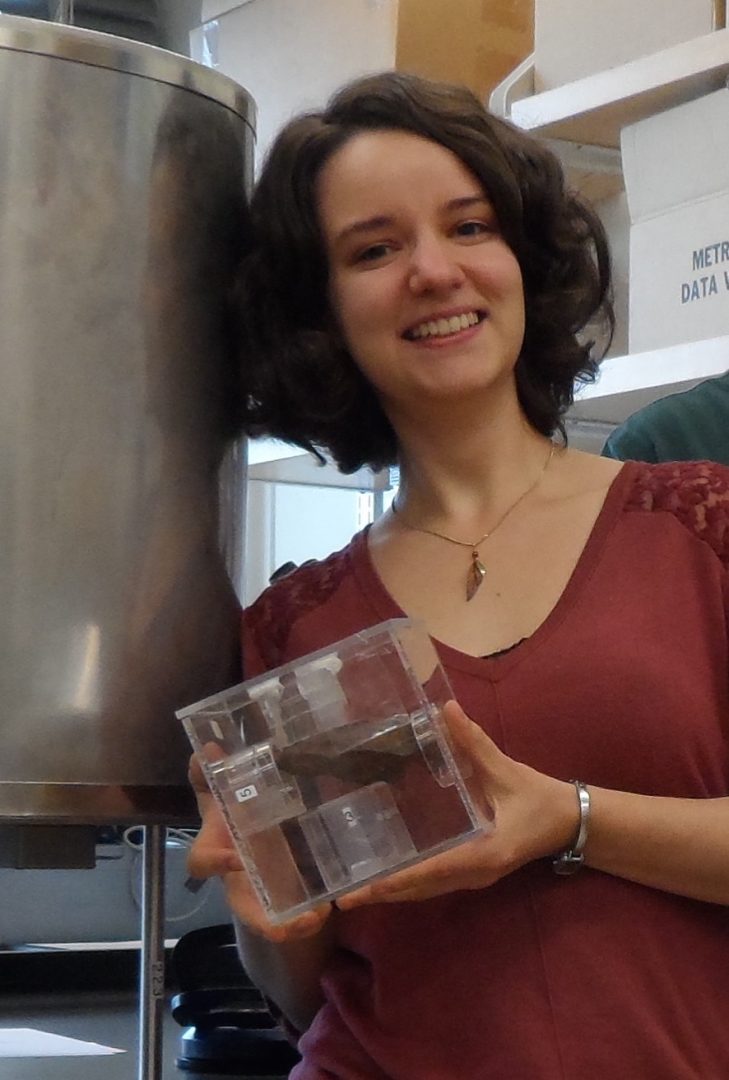 Clara's paper "Meteorite evidence for partial differentiation and protracted accretion of planetesimals" combines a pioneering synchrotron paleomagnetic technique with impact simulations and planetary thermal and collisional evolution models to demonstrate that the parent planetesimal of the IIE iron meteorites had a metallic core that generated a magnetic field.

Planetesimals are the only planetary bodies that did not experience long-term geological activity, offering a window on the early stages of terrestrial planets. The timing, location and mechanism(s) of planetesimal accretion has been debated for decades. In particular, the contrasting nature of chondrite (undifferentiated) and achondrite (differentiated) meteorites has often been explained by a spatially- and temporally-distinct formation for their parent body, excluding the possibility that both types of meteorites originated on a common planetesimal.

This assumption is at the foundation of modern meteorite classification schemes. By contrast, it has also been proposed that some planetesimals may have experienced only partial melting and differentiation, making a common origin of chondrites and achondrites possible. However, the small number of meteorites thought to have originated on partially-differentiated planetesimals has limited our understanding of these objects.

In this paper, the authors combine a pioneering synchrotron paleomagnetic technique with impact simulations and planetary thermal and collisional evolution models to demonstrate that parent planetesimal of the IIE iron meteorites had a metallic core that generated a magnetic field. Building upon previous work showing that the IIE parent body hosted chondritic and achondritic silicates, their results demonstrate that planetesimals could preserve chondritic material despite forming a central metallic core. This supports the idea that the chondritic/achondritic petrologic division need not correspond to separate parent bodies.

This study adds to an increasing body of work challenging the current topology of the meteorite family tree and provides new experimental constraints for planetary accretion models. 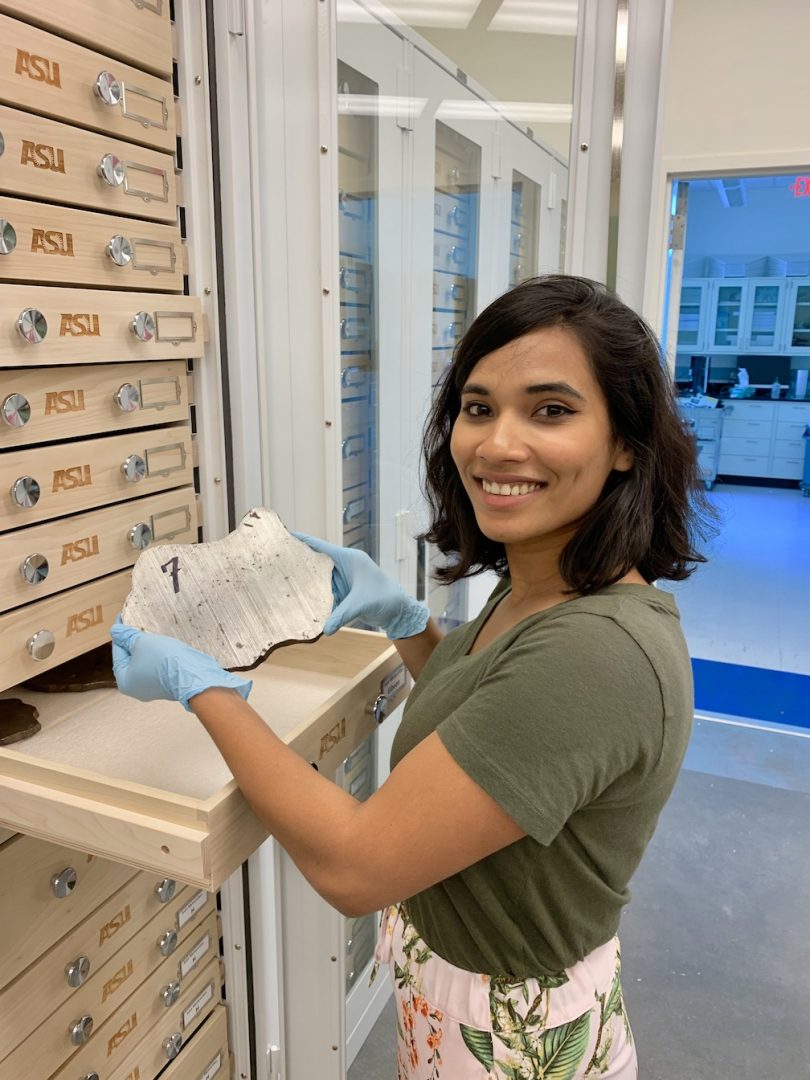 Soumya's paper ‘Correlated iron isotopes and silicon contents in aubrite metals reveal structure of their asteroidal parent body’ investigates the origin of metal in aubrites and the thermal history of the aubrite parent body.

Aubrites are pyroxenitic achondrites that are known to contain Si-bearing Fe-Ni metal and provide the opportunity to study the correlation between the silicon content and iron isotope composition of these metals that are thought to have equilibrated with the surrounding silicates. Aubrites are also thought to represent the differentiated products of enstatite chondrite-like starting materials and therefore provide insights into differentiation processes under reducing conditions.

Based on the results of a correlated investigation of iron isotope composition and silicon content of silicon-bearing metal grains from several aubritic meteorites and thermal modelling, the authors show that these aubrite metals equilibrated with silicates at temperatures ranging from ~1430 K to ~1640 K and likely sampled different depths within their asteroidal parent body. The highest temperature in this range corresponds to their equilibration at a minimum depth of up to ~35 km from the surface of the aubrite parent body, followed by brecciation and excavation by impacts within 4.3 Myr after Solar System formation.

This study reveals that metals from brecciated aubrites record equilibration over a range of temperatures and therefore, assumption of a single equilibration temperature to estimate the metal-silicate iron isotope fractionation factor from such samples must be made with caution.