Leighlinbridge is an ordinary (L6) chondrite that fell the night of November 28, 1999,  in County Carlow, Ireland. 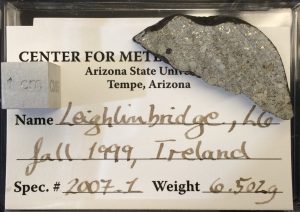 According to the Meteoritical Bulletin (MB 84), “a bright fireball accompanied by detonations was observed over Carlow”.  In an article from January of 2000, BBC News described the fall as spectacular, and cited witness accounts of the fireball lighting up the night sky and sending out booming explosions. Photo ⓒ ASU/CMS.

A Scottish meteorite dealer offered a reward of up to £20,000 for a large piece of the stone, but it wasn’t until 2 weeks later that he was anonymously sent a recovered piece of the meteorite.  According to BBC News, the parcel’s delivery had been delayed because it lacked a customs declaration, and it was eventually learned that the meteorite had been found on a road by a local grandmother.

To date, 4 stones totaling 271 g have been recovered.