Peckelsheim is an achondrite (diogenite-pm) that fell the afternoon of March 3, 1953.

According to the Meteoritical Bulletin (MB 46), a group of workers in the forest outside of Peckelsheim, Germany, heard "a whine similar to that of shell-splinter" around 2:30 PM. The meteorite hit a tree branch, and landed at the feet of the workers. 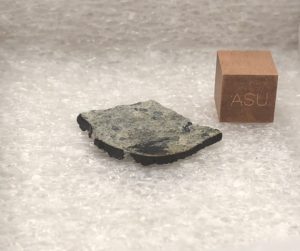 Peckelsheim is classified as a diogenite-pm, meaning that it is a polymict breccia from the diogenite group.  Part of the HED (Howardites, Eucrites and Diogenites) group of achondrites, diogenites are believed to originate in the crust of Asteroid 4-Vesta. According to radioisotope dating, the HED achondrites crystallized between 4.43 and 4.55 billion years ago. Diogenites are plutonic igneous rocks that form deep in the crust and cool very slowly, resulting in large crystals.

They are named for the ancient Greek philosopher Diogenes, who was the first to suggest that meteorites were not terrestrial rocks, and actually originated in space.

Approximately 118 g (just over 4 oz) of the Peckelsheim meteorite were recovered.

In 2007, NASA launched the Dawn mission to study Vesta and the dwarf planet Ceres.  The mission's goal was to provide insight into the formation and evolution of solid bodies in the early Solar System using a visible camera, a visible and infrared mapping spectrometer, and a gamma ray and neutron spectrometer. The extremely detailed images Dawn captured of Vesta's surface enabled the compiliation of high-resolution global geological and tectonic maps of Vesta.

Watch the video below for some of the Dawn mission's greatest hits from Vesta!