Tagish Lake is a C2-ungrouped carbonaceous chondrite that fell in Canada in 2000. According to the Meteoritical Bulletin (MB 84), the Tagish Lake fall was preceded by a bright fireball visible in northern British Columbia and the southern Yukon, and loud explosions the morning of January 18th, 2000. The meteoroid detonated at an altitude of 30 to 50 km from Earth’s surface, and many of the resulting fragments landed on the frozen surface of Tagish Lake, British Columbia.

The meteorite’s spectacular entry was witnessed by several residents, and was also detected by seismographs, as well as satellites in Earth orbit.

The first frozen specimens, totaling approximately 1 kg, were recovered a week after the fall, and more pieces were located in late April and early May, bringing the total recovered mass to 10 kg. Many of the specimens recovered in the spring had melted into the ice of the lake, some of them over 20 cm (~ 8”) deep, and had to be cut out of the ice! They have been stored at temperatures below freezing.

Based on reconstruction of the meteoroid’s trajectory and orbit before impact, as well as spectroscopic and near-infrared photometric analyses, Tagish Lake is believed to be derived from a D-type asteroid, the most likely candidate being 773 Irmintraud. 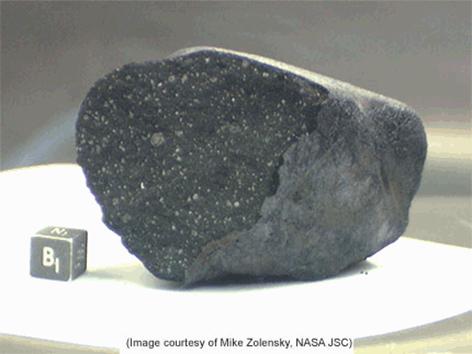 A photo of the Tagish Lake fragments (GSC): http://cgc.rncan.gc.ca/meteor/images/tlm1.jpg