Vigarano is a (CV3) carbonaceous chondrite that fell the evening of January 22, 1910, near Ferrara, Italy.  Vigarano is the type specimen for the CV group meteorites which are, according to The Meteoritical Society, "distinguished by large (mm-sized) chondrules, many of which are surrounded by igneous rims, large refractory inclusions and abundant matrix (40 vol%); CV chondrites may be divided into oxidized and reduced subgroups."

In a 2010 magazine article, Dr. Enrico Trevisani (Conservator of Earth Sciences, Museo di Storia Naturale di Ferrara, Italy) references an eyewitness account of the meteorite's fall, written by municipal secretary of Vigarano Mainarda, Ugo Martini:
"On the night of 22 January 1910, at 21:30, the Bovini family, who live in the Saracca farm house, owned by Mr. Michele Cariani in Vigarano Pieve, a hamlet in the Municipality of Vigarano Mainarda (Ferrara), was awakened by a strong explosion that was like a mortar explosion. The night was stormy, it was snowing, and a few women were spinning in the kitchen. The ladies claim that they saw a streak of lightening at the same time as the explosion. They got scared, and called the men who were sleeping. The men explored the outside of the house with lanterns. They saw something three metres south east of the house, on the ground lightly covered with snow, and immediately confirmed that the hole had been made recently. Naturally they sank a shovel into the hole, and hit a solid, cold body, which they took out".

The history of the Vigarano meteorite is particularly interesting.  While 16 kg of material were recovered in 1910 (the first mass immediately after impact, and the second the following month), research undertaken by Dr. Trevisani in recent years, has unearthed an additional 6.9 kg in a private collection, as well as a plethora of Vigarano imposters.  Some of these imposters were even identified in museum collections! 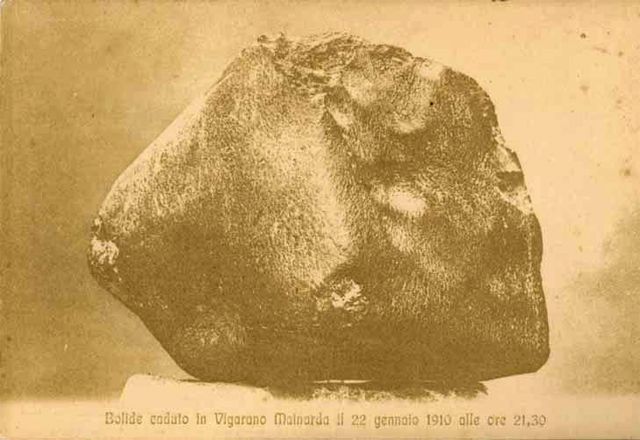 The meteorite's fall was widely publicized, and the main mass was featured on a tourism postcard in 1911.

Learn about the history of the Vigarano meteorite and see photos here!