Menu
Sign In / Sign Out
Navigation for Entire University
Buseck Center for Meteorite Studies
Skip to content
What's better than a Martian meteorite?  Two Martian meteorites!
The Center for Meteorite Studies was recently gifted two pieces of the meteorite popularly known as Black Beauty (NWA 7034 and NWA 10922), which is a type of rock from Mars described as a polymict breccia.
According to the Meteoritical Bulletin (MB 105) description of NWA 10922:
The stone appears to have been sitting in the desert soil only half exposed for a relatively long time, as one side appeared smoothed and shiny, with a sand-blasted, black exterior, while the other side was covered with light-yellow caliche. Upon removal of the caliche with diluted glacial acetic acid, a preserved, brown colored, glassy, flow-lined, fusion crust was revealed. 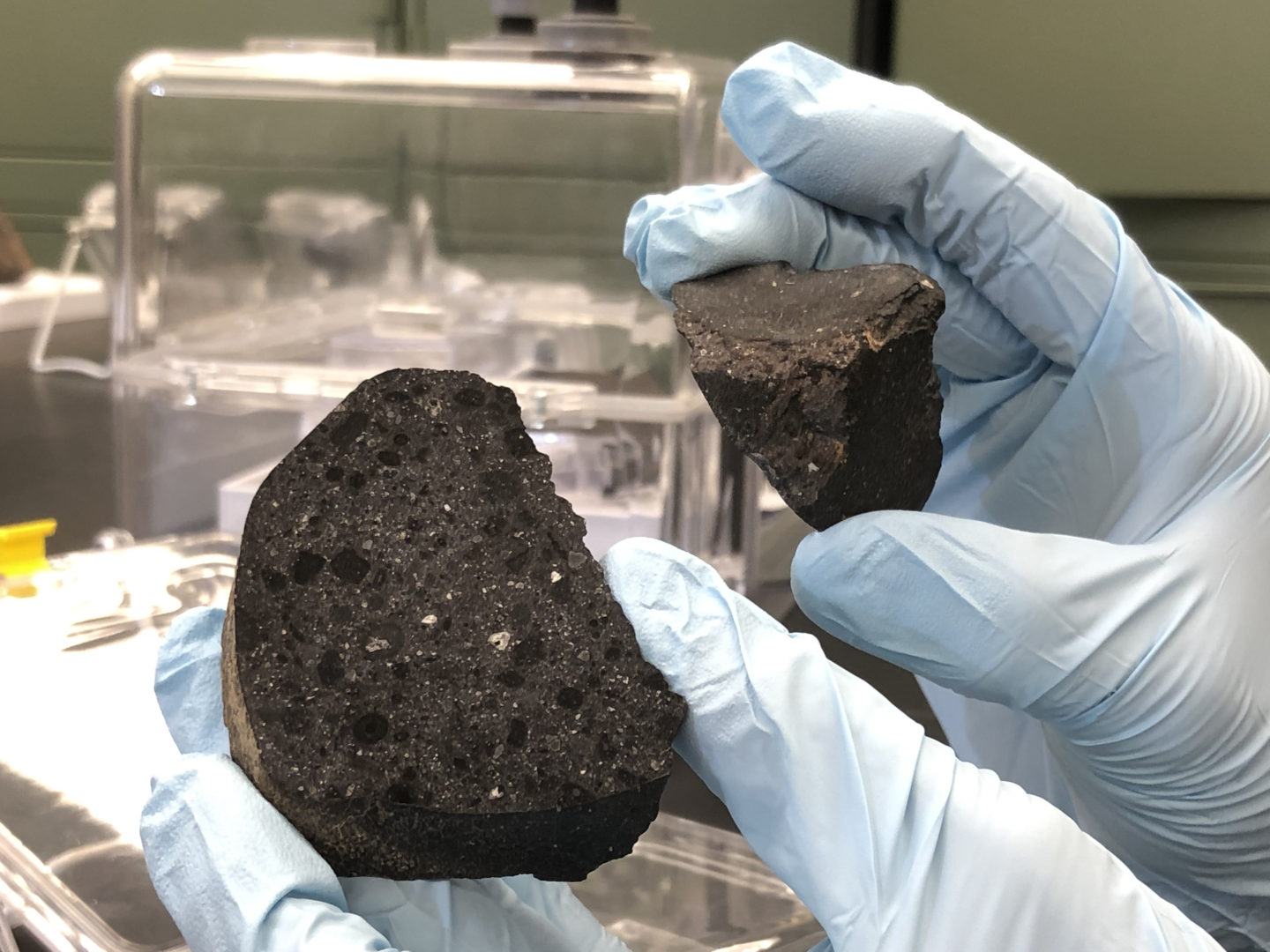 These two pieces, NWA 7034 (77.1 g, left) and NWA 10922 (67.2 g, right) are the generous gifts of Jay Piatek. Photo: ASU/CMS.
Black Beauty is a polymict breccia containing a diverse assemblage of igneous and "sedimentary" materials. The meteorite records a complicated history of volcanic processes, low-temperature alteration, and impact processing on Mars.
The bulk chemical composition of NWA 7034 closely matches that of the Martian crust as measured by NASA's Mars Exploration Rovers and Mars Odyssey Orbiter. It also contains more water (approximately 0.6 wt%) than any other known Martian meteorite.
This video was made from CT scans of a slice (45 mm x 55 mm x 4 mm) of the NWA 7034 (AKA “Black Beauty”) Martian meteorite from the ASU Center for Meteorite Studies collection. The CT imaging of this meteorite slice was performed at the American Museum of Natural History, New York.

New Orleans
September’s Meteorite of the Month is New Orleans, an ordinary (H5) chondrite that fell in Louisiana, in 2003. According to the Meteoritical Bulletin (MB88): On the afternoon of September 23rd 2003, a meteorite crashed through the two-story home of Ray and Judy Fausset, who were not at home at the time. Neighbors said that they [...]

HUGE thanks to @AskAMuseum for organizing another amazing event yesterday, and to everyone who sent us questions - let the countdown to next year's event begin!🎉 #AskAMuseum #keepaskingquestions