The Nininger Meteorite Award recognizes outstanding student achievement in the meteoritical sciences as embodied by an original research paper. 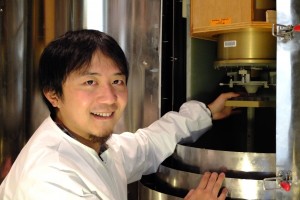 Roger’s paper “Nebular magnetic fields recorded by the Semarkona meteorite”, describes how a recently developed paleomagnetic technique known as SQUID Microscopy was used to measure the magnetic remanence (the magnetization remaining after removal of an external magnetic field) of eight dusty olivine-bearing chondrules from the Semarkona LL3.0 chondrite.

Adam’s paper, entitled “Early accretion of water in the inner solar system from a carbonaceous-like source”, provides evidence that the water accreting in the very early inner Solar System had the same source-signature as carbonaceous chondrite meteorites and modern-day Earth.

Read more about the award, and this year's recipients' research, here!