The ASU Center for Meteorite Studies is pleased to announce that Emily Worsham, a graduate student at the University of Maryland, is the recipient of the 2016 Nininger Meteorite Award. 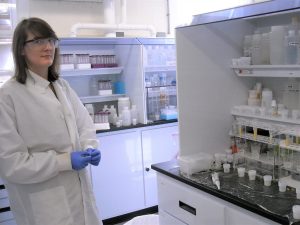 Emily's paper “Siderophile element systematics of IAB complex iron meteorites: New insights into the formation of an enigmatic group” (coauthored by Katherine Bermingham, and Richard Walker) addresses the disputed origins of IAB iron meteorites. The IAB complex is a large group of chemically and texturally similar meteorites containing a main group and several chemical subgroups. The complex likely represent metals with a thermal history unlike most other iron meteorite groups, which sample the fractionally-crystallized cores of differentiated planetesimals. Opposing models for the formation of the IAB complex invoke either an internal (decay of 26Al) or external (impact-generated) heat source. This paper details a comprehensive study of highly siderophile element (HSE) characteristics and Re-Os isotope systematics, along with trace element modeling within the subgroups, to elucidate the crystallization mechanisms of IAB melts and the degree of differentiation of the IAB parent body(ies).

The absolute and relative HSE abundances indicate that the IAB subgroups formed from a minimum of five separate parental melts. Most subgroups crystallized by complex crystal-liquid fractionation and mixing processes, indicating that the initial melts may have been impact-generated. The characteristics which distinguish some IAB complex irons from fractionally-crystallized iron meteorite groups likely originated because of their formation on undifferentiated parent bodies where impacting and mixing processes were important. Thus, many IAB irons appear to sample a type of parent body intermediate between primitive and fully differentiated parent bodies; a finding which has implications for why and how some asteroids differentiated into a core, mantle, and crust, and why some did not.