Dr. Audrey Bouvier was a postdoctoral scholar and faculty research associate in the Center for Meteorites Studies from 2007 to 2011. While at ASU, her research focused on unraveling the chronology of planetary processes that took place during the first few million years of Solar System history, such as the formation of the first condensates in the solar nebula, and the accretion and evolution of planetesimals.

Pursuant to this research, she co-authored a paper with Dr. Mini Wadhwa, published in Nature Geoscience, which pushed back the age of the Solar System using both precise long-lived and short-lived isotope chronometry of a pristine meteoritic refractory inclusion. This publication was highlighted by Nature Geoscience editors as one of the journal’s top ten papers during the journal’s 5-year anniversary celebrations in 2013, and has over 400 peer-citations today! 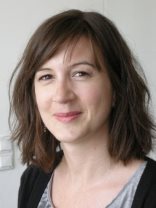 From ASU, Dr. Bouvier moved on first to the University of Minnesota where she was an associate researcher. From 2013 to 2018, she held a prestigious Canada Research Chair and became a tenured associate professor at the University of Western Ontario. In 2019, she moved back to her native Europe to start a new professorship at the Bavarian Research Institute of Experimental Geochemistry and Geophysics at the University of Bayreuth. She arrived with the ambition and excitement to create a new research focus in isotope cosmochemistry there which required establishing new cleanroom facilities and mass spectrometry instrumentation for metal isotope research.

Audrey has been honoured over the course of her career by the Meteoritical Society with the 2013 Nier prize and was elected Fellow in 2018. Recently, she became involved in space mission planning and analyses of sample returned from the Moon, Mars and asteroids. She is currently a remote member of the team carrying out the initial stage of chemical analysis of Ryugu materials brought back by the Hayabusa2 sample return mission. She hopes to receive some of the precious Ryugu recovered fragments to analyse in her new labs in the near future!