The Center for Meteorite Studies is pleased to offer 4 new free meteorite-themed virtual backgrounds for all your online meetings – because space rocks!

Pallasites such as Seymchan are believed to form between the silicate mantle, or outer shell, and molten metal core of a differentiated asteroid. The primary silicate mineral in pallasites is olivine, distinguishable by its greenish hue. Read the Meteoritical Bulletin entry for Seymchan, here! 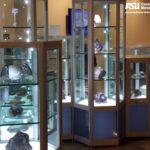 Immerse your virtual self in the Center for Meteorite Studies Meteorite Gallery!

A behind the scenes glimpse of the Center's vast collection of meteorites, including polished sections of pallasites and iron meteorites! 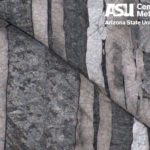 The etched surface of this iron (IVA) meteorite displays a cross-hatched structure in the metal, called Widmanstätten pattern. This pattern (named for Count Alois von Beckh Widmanstätten, director of the Austrian Imperial Porcelain Works, in 1808) indicates extremely slow cooling on the order of 10o Celsius per million years. Most iron meteorites are believed to originate in the cores of large asteroids; when these asteroidal cores were exposed to the cold and vacuum of space as the result of cosmic collisions, the molten metal they comprised cooled over millions of years, resulting in the intergrown metallic lamellae seen here. Read the Meteoritical Bulletin entry for Muonionalusta, here!