The newest meteorite to fall in the US was classified right here at the Center, by Collection Curator Laurence Garvie!

Creston is an L6 (ordinary) chondrite that fell spectacularly in California October 23, 2015, and is California's 5th observed meteorite fall.

According to the Meteoritical Bulletin (MB 104), “…a large fireball lit up the rolling hills of wine country east of Paso Robles. The bolide displayed a multitude of colors as it broke up. 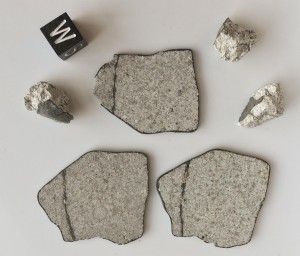 The fireball was captured on at least four all-sky cameras in Parker, Arizona; Riverside, California; El Segundo, California; and the SETI Institute CAMS all-sky system in Sunnyvale, California. Dozens of witnesses close to the ground path heard sonic booms shortly after the fireball terminated. Confirming these accounts, sonic boom signatures were recorded by three California seismic stations, allowing triangulation of the approximate fall zone. Six Doppler radar returns acquired from the NOAA NEXRAD weather radar network were used…” by Robert Matson and Marc Fries “…to further constrain the fall location. The earliest radar signature appears in imagery from the KVTX (Los Angeles, California) radar at an altitude of 16.2 km above sea level (ASL) at 05:47:57.6 UTC – just 12 s after the meteor first appears in the Riverside video. KVBX (Vandenberg AFB, California) recorded signatures of falling meteorites at 05:49:40.3, 05:51:08.9 and 05:53:43.3 UTC at altitudes of 5.6 km, 6.7 km and 1.2 km, respectively; KHNX (San Joaquin, California) recorded several returns at 05:51:57.3 at an altitude of 3.9 km. Finally, KMUX (San Francisco) recorded a pair of returns at 16.2-km altitude at 06:00:41.7. This last return is likely the signature of fine dust, given its altitude and timing, which correlates with eyewitness accounts of a visible smoke trail left by the fireball.

Based on the relative timing and altitude of the earlier five radar returns, the estimated masses of falling meteorites at those locations vary from sub-gram to as much as 10 kg for the earliest return.

Equipped with the radar-cued search area, Robert and Anne Marie Ward located the first stone on 27 October, along the road (California Route 41), 7.3 km northeast of Creston, San Luis Obispo County. The stone broke upon impact, with a total mass of 395.7 g.”

After finding the meteorite, Robert and Anne Marie Ward sent the sample to the ASU Center for Meteorite Studies for classification by Dr. Laurence Garvie.  To date, over 680 g of the Creston meteorite have been recovered, and the type specimen resides in the Center's collection.