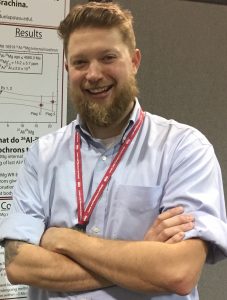 Chronology of Planetesimal Differentiation Based on the Timing of Achondrite Formation in the Early Solar System
The early Solar System was a dynamic period of time during which physiochemical processes were shaping the modern taxonomy of planetary materials. The proto-Sun was growing, the molecular cloud was collapsing into a rotating disk and dust particles began coagulating and accreting to form objects of vital importance for the developing population of rocky bodies. These rocky bodies grew rapidly to sizes of 10s – 1000s km. If these objects formed early enough, they contained sufficient 26Al (a radioactive isotope of Al with a short half-life of 705,000 yrs) to heat the interiors to melting temperatures creating the first igneous rocks in our Solar System. The results of this internal heating varied with some bodies experiencing high degrees of melting while others topped out at much lower temperatures. This, along with varying starting compositions, produced numerous distinct lithologies. One of the key questions in understanding how these early igneous rocks shaped the modern composition of rocky bodies involves understanding the chronology of their formation. Due to their formation in the earliest period of Solar System history, there are chronometers ideally suited to investigate their formation with fine time resolution. Three such chronometers are the focus of this work and the implications for the evolution of the Solar System is discussed.
This research investigated the formation ages of three distinct achondrite types using the relative 26Al-26Mg and 53Mn-53Cr chronometers and the absolute Pb-Pb chronometer. Brachinites are ultramafic, wehrlitic-dunitic achondrites whose petrogenesis is debated, but are thought to represent partial melt residues. The chronology of two brachinites indicates that partial melting began contemporaneously with formation of the earliest formed solids in our Solar System (CAIs) and continued for at least 17 Ma. These findings have important implications for the evolution of the brachinite parent body(ies). Eucrites are basaltic crustal rocks from the asteroid Vesta and are key samples to understand how igneous activity progressed on a differentiated parent body. Due to their emplacement in the crust of Vesta, many eucrites experienced post formation thermal and shock metamorphism which obfuscates the chronology of their formation. Northwest Africa (NWA) 8661 is a pristine, unequilibrated and unshocked eucrite with intact isotope systematics providing unequivocal evidence for basalt formation on Vesta 3 Ma after CAIs. This is the first reported formation age of any eucrite. NWA 11119 is an ungrouped achondrite with an andesitic-dacitic bulk composition and has the highest bulk SiO2 of any known achondrite. The chronology of NWA 11119 indicates that evolved high SiO2 melts were being produced on planetesimals ~ 2 Ma after CAIs and may inform andesite production on other planetary bodies including Earth.
Advisor: Meenakshi Wadhwa
Committee members: Steve Desch, Kip Hodges, Tom Sharp, Lindy Elkins-Tanton