The mission, scheduled for launch in the 2020s, will follow up on the results of NASA's Galileo mission of 20 years ago. That spacecraft found Europa to be an intriguing body. Its surface is a shell of ice perhaps a few tens of miles thick, covering a salty water ocean.

The icy surface has numerous colored cracks and spots, perhaps rich in salts, where the ocean water appeared and froze. Observations from Earth orbit using the Hubble Space Telescope have also revealed that Europa erupts plumes of water vapor a hundred miles high or more. 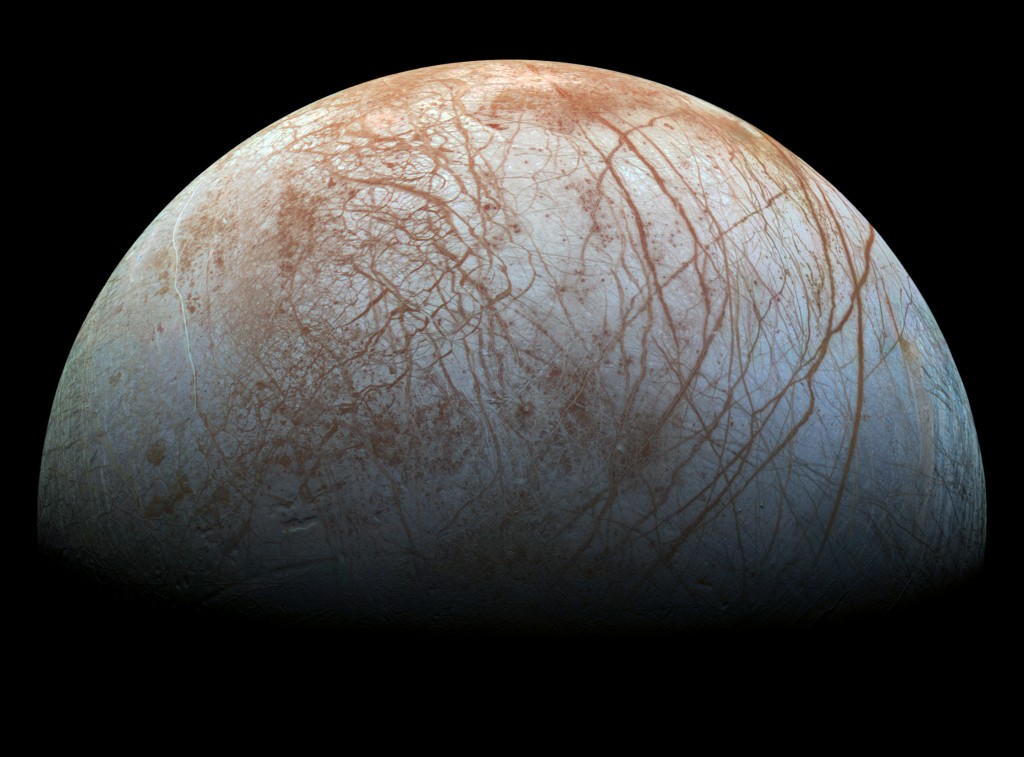 NASA is sending a mission to see if Europa, an icy moon of Jupiter, has conditions suitable for life, and three ASU scientists are involved with the mission's instruments. Image credit: NASA/JPL-Caltech/SETI Institute.

The payload of nine science instruments will greatly increase the limited knowledge of Europa, tackling challenges such as imaging the surface in high-resolution and determining the thickness of the moon’s icy shell and the depth of its ocean.

A thermal instrument will scour Europa’s frozen surface in search of thermal anomalies.

"This is a terrific opportunity for ASU and SESE," says Philip Christensen. A Regents' Professor of geological sciences in SESE, he is the principal investigator for the Europa Thermal Emission Imaging System (E-THEMIS).

"The role E-THEMIS plays in the mission is to act as a heat detector," he explains. "It will scan the surface of Europa at high resolution for warm spots." Such locations, Christensen says, could be places where the ice shell has become thin and they are the most likely locations for plume activity.

The E-THEMIS instrument will be built at ASU using the engineers and facilities in SESE on the Tempe campus that are currently building Christensen’s OTES instrument for the OSIRIS-REx mission. ASU will do the instrument design, fabrication, assembly, test, and calibration, along with mission operations and science data processing. Ball Aerospace will develop the electronics that will be integrated into E-THEMIS.

Bizarre features on Europa’s icy surface suggest a warm interior. This view of the surface of Jupiter's moon Europa was obtained by NASA's Galileo mission, and shows a color image set within a larger mosaic of low-resolution monochrome images. Galileo was able to survey only a small fraction of Europa's surface in color at high resolution; a future mission would include a high-resolution imaging capability to capture a much larger part of the moon's surface. Image credit: NASA/JPL-Caltech.

"This plays perfectly into SESE's strengths in combining science with engineering," he says.

Everett Shock and Mikhail Zolotov, co-investigators for the MAss SPectrometer for Planetary EXploration/Europa (MASPEX), will apply their geochemistry expertise to interpret the results.

“In order to assess habitability of Europa we will need to gather information about composition of surface materials and understand their relations with putative water ocean,” explains Zolotov, who is also a co-investigator on the Radar for Europa Assessment and Sounding: Ocean to Near-surface (REASON) and SUrface Dust Mass Analyzer (SUDA).

The MASPEX and SUDA instruments will be used to sample Europa’s thin atmosphere, including plume emissions and small particulates of minerals and ice lofted into space.

“We anticipate lots of data, but the MEANING of the data for the habitability of Europa will require additional experiments, calculations, and theoretical modeling, which are major strengths of the combination of geochemistry, biochemistry, and planetary science in SESE and at ASU,” says Shock.

The School of Earth and Space Exploration is a unit of ASU's College of Liberal Arts and Sciences.