Throughout his career Ronald Greeley was passionate about exploring Mars, so it’s fitting that the late Arizona State University professor’s name will grace maps of the Red Planet.

A large, ancient crater – nearly as wide as Arizona – now carries the name of Greeley Crater, in honor of the Mars science pioneer and longtime professor of planetary science.

Greeley was involved in almost every major solar system robotic mission flown since the late 1960s and advanced the study of planetary science at ASU.

The crater, which spans 284 miles, lies in Noachis Terra, the geologically oldest terrain on Mars. Although the crater's exact age is not known, the smaller impact craters superimposed on it plus its preservation state all suggest an age of at least 3.8 billion years.

It is centered just east of Mars' "Greenwich meridian" and is 37 degrees south of its equator. 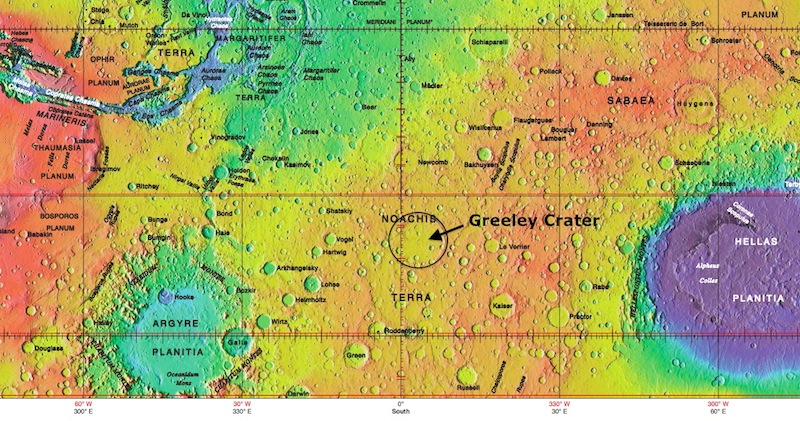 Kenneth Tanaka, a planetary geologist at the U.S. Geological Survey's Astrogeology Science Center in Flagstaff and longtime colleague of Greeley, proposed the name, noting that it was the oldest, relatively well-preserved impact crater on Mars that remained still unnamed.

Tanaka will announce the crater’s naming in his keynote talk at the 24th annual Arizona/NASA Undergraduate Research Symposium on April 17 in Tempe, Arizona.

The International Astronomical Union, the world's authority for feature names on extraterrestrial bodies, formally approved the name on April 11. The union's rules require that a person must be deceased for at least three years before any commemoration can be made; Greeley died in October 2011.

During his career, Greeley was involved in almost every major solar system robotic mission flown since the late 1960s. These include the Magellan mission to Venus, Galileo mission to Jupiter, Voyager 2 mission to Uranus and Neptune, and shuttle imaging radar studies of Earth.

Passionate about exploring Mars, he contributed to numerous Red Planet missions, including Mariners 6, 7 and 9; Viking; Mars Pathfinder; Mars Global Surveyor; and the Mars Exploration Rovers. He was a co-investigator for the High Resolution Stereo Camera on the European Mars Express mission.

Joining the ASU faculty in 1977, Greeley was a pioneer in planetary science experiments. For example, he created a vertical gun to study impact cratering processes. Another instance was the use of wind tunnels to study the behavior of wind-blown sand particles and dunes, which are important features on the surfaces of Earth, Mars, Venus, and Saturn's largest moon Titan.

To study sand movement on Venus, where the atmosphere is nearly 100 times denser than on Earth, he built a special high-pressure wind tunnel. This same tunnel was recently reconfigured for Titan's surface conditions, and researchers discovered that to move Titan's sands, winds have to be much stronger than scientists had thought.

At the time of his death, Greeley was Regents' Professor of planetary geology in the School of Earth and Space Exploration, an interdisciplinary school combining science and engineering studies. Greeley had a key role in creating it and he served as interim director at its inception.