Center Meteorite Curator Laurence Garvie is first author on a new paper published in the journal Icarus. According to Dr. Garvie, the paper (Sedimentary laminations in the Isheyevo (CH/CBb) carbonaceous chondrite formed by gentle impact-plume sweep-up) required a true interdisciplinary effort, with contributions from meteoriticists, astrophysics, and sedimentologists. 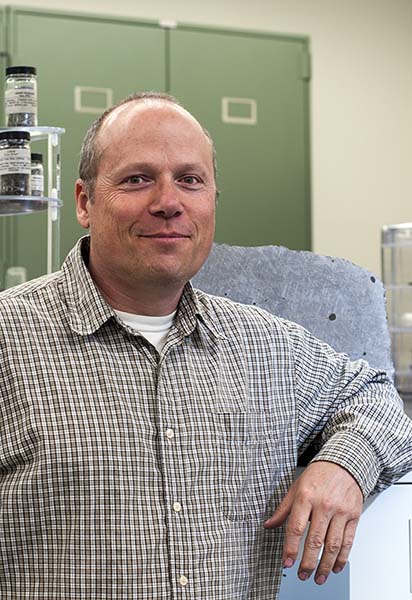 "I am often asked “what is your favorite meteorite?” Being the curator, I have thousands to choose from, but I always point to Isheyevo. Now, I finally have a paper published describing why this meteorite is so special – it is the only one that shows macroscopic sedimentary laminations. In addition, it is also the Solar System’s oldest sedimentary rock, having formed just a few million years after the formation of the oldest objects in our Solar System, the CAIs, and is way older than the oldest Earth rock."

This meteorite provides evidence of gentle layer-by-layer accretion in the early Solar System, and also extends the terrestrial sedimentary source-to-sink paradigm to a near vacuum environment where neither fluvial nor aeolian processes operate.

Isheyevo is the first meteorite that shows prominent macroscopic sedimentary laminations.  Read the full text of the paper here!