Get to know Center researchers with this new periodic feature!

Dr. Jemma Davidson is an Assistant Research Scientist in the ASU Center for Meteorite Studies (CMS) and School of Earth and Space Exploration (SESE). Her research focuses on the petrology and isotope chemistry of a wide variety of planetary materials, including interplanetary dust particles, meteorites from Mars, the Moon, and the asteroid belt, and samples of lava flows collected on Earth. 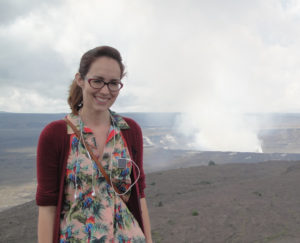 Davidson knew she was destined for a scientific career when she studied geology at high school. The enthusiasm and encouragement of a teacher (shout out to Mr. Finn!) convinced her that studying geology was a legitimate career for a kid from a council estate.

During her undergraduate studies at Durham University in the north of England, she realized that she didn’t just want to study rocks – she wanted to study rocks from space. Even though her Earth Science department didn’t have a planetary science component she convinced her Master’s adviser to help her set up a research project working on lunar samples returned from the Moon by the Apollo 15 and 17 missions.

That was the first time I’d ever held anything extraterrestrial. While I worked on those samples they went everywhere with me – I didn’t let them out of my sight. Then each night, after locking them away and leaving the lab, I’d look up at Moon and it would blow my mind that I could see where those samples had been collected by astronauts before I was even born. I was hooked.

After graduating with a first class M.Sci. degree from Durham University in 2006, she switched focus from the Moon to even more exotic material that predates our own Solar System.

During my last year of undergraduate study, while I was working on the Apollo samples, I wrote a research paper about presolar grains in meteorites. I had literally never heard of them before but they instantly won me over.

Presolar grains are tiny, microscopic pieces of dust that form when dying stars either explode (in the case of novae and supernovae) or start to expand and slough off material that condenses as it cools. They are literally pieces of dead stars that we can study in the lab.

It’s pretty amazing to think that some meteorites preserve what are essentially fossil pieces of stars that lived and died before our Solar System even existed. 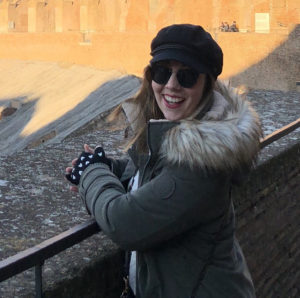 The types of meteorites presolar grains are found in – chondrites – are sources of constant surprises. In fact, last year Davidson was involved in a study led by Dr. Larry Nittler of the Carnegie Institution of Science that identified a cometary building block preserved inside a meteorite from an asteroid, nick-named the cosmic turducken by mainstream media.

After obtaining her PhD for her presolar grain studies from The Open University in 2009, Davidson moved to the US to start a string of postdoctoral positions that would take her from the University of Arizona where she worked on the OSIRIS-REx asteroid sample return mission, to the University of Hawaiʻi at Mānoa, and the Carnegie Institution of Science in Washington D.C. before she ultimately found a home as a Sun Devil at ASU in 2018.

Throughout her career, Davidson has jumped at the opportunity to work on many different types of extraterrestrial – and even terrestrial – materials.

I joke that my scientific career has Jekyll and Hyde style personalities – one side of me studies the earliest-formed Solar System materials (the really primitive stuff that hasn’t been altered since it formed 4.5 billion years ago) while the other side is interested in planetary magmatism, which occurred after large planetary bodies formed and differentiated, and represents the later stages of planetary body evolution. But there’s a common thread that runs through all my research – what materials were present at the start of our Solar System? What was destroyed? What survived? And how did this material evolve to its current state?

Answering questions like those opens up a host of research opportunities; as a cosmochemist and petrologist, Davidson has a skill set ideally suited to working on a whole variety of sample types. Over the last couple of years, Davidson has been working with SESE Director (and former CMS Director) Dr. Meenakshi (Mini) Wadhwa on meteorites from Mars and terrestrial analogs.

Mini offered me the opportunity to fill what I saw as a gap in my knowledge; a deep understanding of samples formed in large planetary-scale systems. Until then I’d mostly studied material from comets and asteroids, not planets. Studying meteorites from Mars – including the famous NWA 7034 (aka Black Beauty) – allowed me to transfer the skills I’d honed for the analysis of chondrites and IDPs and really sink my teeth into planetary-scale processes.

Davidson’s recent work has concentrated on tracing magmatic volatiles (specifically the isotopic nature and abundance of hydrogen) in minerals in martian meteorites. By performing coordinated hydrogen isotope and concentration analyses, this research aims to determine the source and timing of water in the terrestrial planets, trace how this water evolved, and further our understanding of magmatic processes on different planetary bodies. Davidson will soon extend these analyses to a suite of lava samples from Iceland.

As anyone who visits CMS will know, my office is currently teeming with Icelandic basalts and I’ll take any excuse to show them to people; they’re gorgeous but they also provide a very important way for us to understand processes occurring on Mars. We have field context for the Icelandic basalts – we know where they were collected in relation to one another and that allows us to trace the behavior of water within a suite of samples and between suites that experienced different geologic processes. We don’t know exactly where on Mars the martian meteorites came from but the Icelandic basalts provide great analogs for martian samples and will allow us to put data from those samples into context.

Davidson looks forward to the day when samples will be brought back from Mars. In the meantime, she continues to split her research focus between early Solar System materials and planetary-scale magmatic volatiles studies.

For her contributions to planetary science and the OSIRIS-REx mission, Davidson had an asteroid named after her; you can find her namesake, 117595 Jemmadavidson (2005 EG62), in the asteroid belt.