Dr. Michelle Minitti was Assistant Director of the Center for Meteorite Studies from 2005 to 2012, and also served as Interim Director in 2006. While at the Center, Dr. Minitti used Martian analogs to investigate Martian meteorites and their context in Mars remote sensing datasets, as well as the role of water in igneous and weathering processes. She was also Co-Investigator on the NASA Curiosity rover Mars Hand Lens Imager (MAHLI) camera, and was especially active in the Center’s education and outreach programming. With a focus on Mars research, Minitti sought links between data obtained by the many spacecraft at Mars and laboratory created analogues for Martian materials. 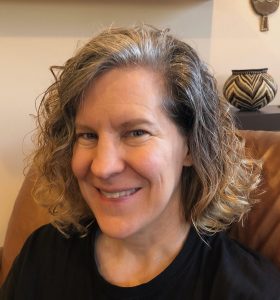 After leaving ASU, Michelle started a new research adventure at the Applied Physics Laboratory in Laurel, Maryland, conducting Mercury-focused lab experiments with Drs. Rachel Klima and Nancy Chabot. While diving into Mercury research, Minitti was lucky enough to stay affiliated with ASU to help plan the 50th anniversary celebration for the Center, celebrated in 2011.

The summer of 2012, Minitti’s  focus turned back to Mars with the landing of the Mars Science Laboratory Curiosity rover in Gale crater. She dove into helping with operations for the MAHLI (Mars Hand Lens Imager) and MARDI (Mars Descent Imager) cameras on Curiosity and doing research based on the observations made by those cameras.

Michelle‘s work with MAHLI led her to be part of a proposal to fly another MAHLI on the Mars 2020 Perseverance rover. The camera was eventually incorporated into the payload as part of the SHERLOC investigation with a new name, WATSON. Today Minitti supports SHERLOC operations as Perseverance explores Jezero Crater. She also serves as a long-term planner for the Mars 2020 mission, working with a team of scientists to ensure the best combination of exploration and sampling for Perseverance, which is collecting samples for NASA’s Mars Sample Return mission.

In addition to her Mars exploration activities, Michelle is a part of the Heimdall investigation team. Heimdall, led by Planetary Science Institute‘s Dr. Aileen Yingst, is a set of four cameras due to launch to Haworth crater at the south pole of the Moon in December 2023 as a part of NASA‘s Commercial Lunar Payload Services program. Heimdall will image the Haworth landing site from the grain scale of the lunar regolith, to the south pole lunar landscape.