The Center for Meteorite Studies and the School of Earth and Space Exploration (SESE) are pleased to announce the winners of the 2017 Nininger Student Travel Award. The goal of this award is to support travel to the annual Lunar and Planetary Science Conference (LPSC) of up to 4 SESE undergraduate and graduate students to present their latest results. 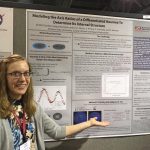 Emilie Dunham
Emilie is a Ph.D. candidate in the Center for Meteorite Studies, studying under Professor Meenakshi Wadhwa. She analyzes the oldest Solar System rocks (calcium-aluminum-rich inclusions) in order to learn about the violent environment in which they were formed.  Specifically, she utilizes mass spectrometry techniques to infer the abundances of elements which only existed in the early Solar System; these analyses provide insight into events that occurred more than 4.56 billion years ago, such as irradiation processes, where high-energy particles collide with nebular gas to produce new elements. Emilie is also advised by Dr. Steven Desch on a secondary project, with the goal of understanding the composition of the Kuiper Belt Object (KBO) Haumea. This KBO likely suffered a large collision which influenced its shape (it is football shaped), and Emilie's research indicates that Haumea has a hydrated silicate/clay core surrounded by a thin (~10km) icy shell. This composition hints that Haumea could have been habitable in the past!  Read Emilie's abstracts here, and here! 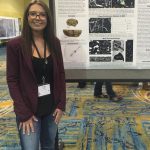 Crystylynda Fudge
Crystyl is a Ph.D. candidate studying shocked meteorites to understand impact conditions on planetary bodies, under the mentorship of advisor Dr. Thomas Sharp. In her research, she uses a combination of optical microscopy, scanning electron microscopy and electron probe microanalysis to investigate transformation and recrystallization textures, and Raman spectroscopy to identify high-pressure mineral assemblages. At LPSC, she presented results on a eucrite containing a range of shock-induced effects, including high-pressure polymorphs of silica and feldspar. Her future work will include further characterization of shock features in HED meteorites and constraining shock pressure-temperature conditions to understand impacts on the  asteroid 4 Vesta.  Read Crystyl's abstract here! 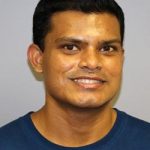 Viranga Perera
Viranga is a Ph.D candidate working with Professor Erik Asphaug. His research areas include the thermal evolution of the Moon, interior structures of asteroids, and the link between the affective domain and online science education. At LPSC, he presented work showing that, due to re-impacting debris, the magma ocean of the Moon likely cooled faster than is currently considered. Read Viranga's abstract here! 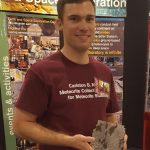 Zachary Torrano
Zack is a Ph.D. candidate in the Center for Meteorite Studies, studying under Professor Meenakshi Wadhwa. He studies calcium-aluminum-rich inclusions (CAIs), which were the first solids formed in the early Solar System and, thus, preserve a record of the earliest processes and conditions in the solar nebula. At LPSC, he presented high-precision Ti and Cr isotope measurements from a new suite of CAIs that were analyzed on the Neptune MC-ICP-MS in ASU’s Isotope Cosmochemistry and Geochronology Laboratory. These samples show resolvable variations in mass-independent anomalies in both Ti and Cr isotopes, suggesting significant isotopic heterogeneity in the broader CAI-forming region in the protoplanetary disk. His future work will seek to expand this sample set and characterize the nature of this heterogeneity.  Read Zack's abstract here!