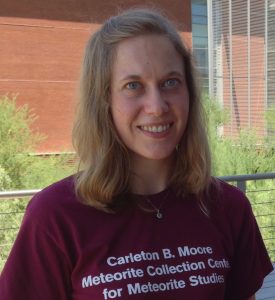 Emilie Dunham received her B.S. in Astronomy (with minors in Geology and Physics) from Case Western Reserve University in 2014.  As an undergraduate student, Emilie worked with Dr. Ralph Harvey on comparing the petrology of martian meteorites and dolorites to understand the process that formed lithologic boundaries in the martian meteorite EETA79001. Excited to continue her meteorite studies, and to combine her astronomy background with geology, she enrolled as a Ph.D. student in the School of Earth and Space Exploration at ASU.
Emilie’s primary research in the Center for Meteorite Studies (CMS) aims to understand early Solar System processes by determining chemical and isotopic compositions of meteorites. To this end, she uses the Secondary Ion Mass Spectrometer (SIMS) at ASU to measure the abundances of beryllium and boron isotopes in calcium- and aluminum-rich inclusions (CAIs) found in carbonaceous chondrites, with the goal of de 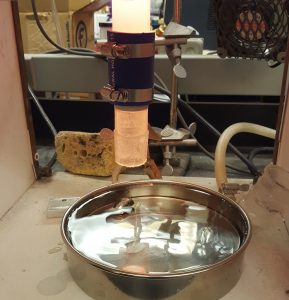 ciphering the irradiation environment during Solar System formation. As the first solids to crystallize from the nebular gas surrounding our protostar, CAIs recorded important clues about the events that occurred in the early Solar System.
As part of this project, Emilie has been synthesizing her own glass standards by melting oxide powders at high temperatures (read more about this exciting process here). These glasses will be used as SIMS standards for analytical comparison to meteorite materials.
Emilie’s secondary project involves determining the composition of the intriguing Kuiper Belt Object Haumea.  Located near Pluto, and of approximately one third Pluto’s mass, Haumea is covered in a shell of ice and is one of the fastest spinning bodies in the Solar System, completing a full rotation every ~4 hours! This rotational speed has caused Haumea to flatten into an oblong “football” shape.  Emilie is modeling Haumea’s unique shape using an N-body code
An N-body code is a tool widely used in astrophysics to simulate a system of particles under the influence of physical forces, such as gravity, to investigate dynamic processes
in order to constrain its core composition – data from these simulations could provide valuable information on Haumea’s potential habitability! 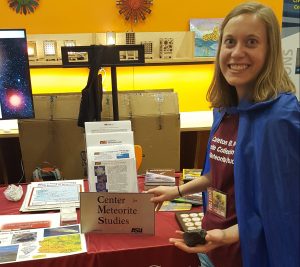 Emilie is an active participant in the Center’s public outreach events, representing the CMS at ASU’s Night of the Open Door (a signature event of the AZ Sci-Tech Festival), Earth & Space Exploration Day, ASU Homecoming, and Phoenix Comicon. While at ASU, she continues to pursue her interests in teaching; she has been a graduate teaching assistant in the School of Earth & Space Exploration, a Sundial mentor, and a Graduate Partners in Science Education mentor.
Emilie was awarded the prestigious NASA Earth and Space Science Fellowship (NESSF) in 2016.  The NESSF program awards students from accredited U.S. universities pursuing Master of Science or doctoral degrees in Earth and space sciences, or related disciplines.
Emilie regularly presents her research findings at the annual Lunar and Planetary Science Conference, as well as annual meetings of the Meteoritical Society – click on the links below to read her most recent abstracts!
Modeling the axis ratios of a differentiated Haumea to determine its internal structure
E. Dunham, S.J. Desch, V. Perera and S.R. Schwartz
48th Lunar and Planetary Science Conference (2017), Abstract #2438
Beryllium-boron systematics of two distinctive CAIs from CV3 chondrites: the relatively pristine CAI B4 from NWA 6991 and the FUN CAI CMS-1 from Allende
E. Dunham, M. Wadhwa and S.J. Desch
48th Lunar and Planetary Science Conference (2017), Abstract #1507
Beryllium-Boron Systematics of Refractory Inclusions in CR2 and CV3 Chondrites: Evidence for 10Be Heterogeneity
E. Dunham, M. Wadhwa, S. Simon, and L. Grossman
79th Annual Meeting of the Meteoritical Society (2016), Abstract #6222
Further Evidence of Beryllium-10 Heterogeneity in the Early Solar System Inferred from Be-B Systematics of Refractory Inclusions in a Minimally Altered CR2 Chondrite
E. Dunham, M. Wadhwa, R. Hervig, S. Simon, L. Grossman
47th Lunar and Planetary Science Conference (2016), Abstract #2723
Read more about Emilie's research here!