Menu
Sign In / Sign Out
Navigation for Entire University
Buseck Center for Meteorite Studies
Skip to content
Stony-iron meteorites contain approximately even amounts of silicates and nickel-iron alloy, and are divided into two distinct groups: Pallasites and mesosiderites.
Pallasites
Pallasites are believed to form between the silicate mantle, or outer shell, and molten metal core of a differentiated asteroid.
The primary silicate mineral in pallasites is olivine, distinguishable by its greenish hue.
The olivine crystals contained in the Marjalahti pallasite are of such consistently high purity that they were adopted as a scientific standard for the composition of olivine (aka the gemstone peridot).
Gem-quality peridot has been identified in multiple pallasite meteorites.
Click on the images below to learn about some of the pallasites in the ASU Center for Meteorite Studies collection! 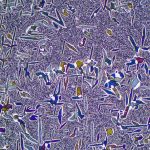 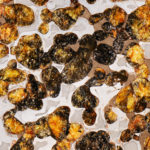 Mesosiderites
Mesosiderites are brecciated stony-iron meteorites that contain nearly equal amounts of metal and silicates.
They are likely formed by collisions of metal-rich and silicate-rich asteroids, and their silicate portion is composed mainly of igneous rock fragments.
Fewer than 150 mesosiderites have been identified to date.
Click on the images below to learn about some of the mesosiderites in the ASU Center for Meteorite Studies collection! 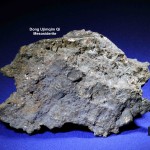